The psychiatric evaluation of the president of the USA, one Donald J. Trump (A/USA)

Prev
Next
Awakening
The psychiatric evaluation of the president of the USA, one Donald J. Trump (A/USA)

The karmicons created Trump by their image

For the karmicons, Trump is not a real being, he is just an incarnation of another person. For them, our lives are not real either, they are just a movie show. The psychiatric evaluation above is also just a part of the karmicons game. Many other psychiatrists are claiming that Trump has all the symptoms of mental disorders. Washington Post daily counts his lies, and they are already in ten of thousands.

Putting Trump and other psychopaths on the president positions of power, the karmicons are showing us that they can do everything they want, mocking us all the way. You are fools and you deserve this kind of presidents:)

Many with such a psych eval as Trump would be sent to visit a psychiatrist and to mental healing, while the president, and quite opposite:), represents approximately half of the Americans a role model and a leader who they want to lead them four more years:)

How is possible that such a person became president of the USA? The only way is that he was put there by the karmicons. In the natural society of awakened, natural, and loving beings, Trump couldn’t be a president of the bicycle shed, let alone of anything else:)

Regarding that the karmicons created Trump, we could also write their psychiatric evaluation:)

What kind of beings are intentionally creating such scripts forcing humans into this kind of life? The karmicons are parasites who create such persons, so they feed them with negative energy. While devouring the filth, they also fantasize about their omnipotence, they are full of god complex losing themselves in the grandiosity delusions. They think that they are the Masters of Life and Death.

For writing the incarnation scripts, they use scriptwriting manuals like DSM, Diagnostic and Statistical Manual of Mental Disorders, encyclopedia of mental, emotional, and physical limitations, diseases, malfunctions, harms, deformations, and causes of deaths, and many other black magicians and sadism manuals for torturing humans and animals. They write their scripts according to the first scriptwriting rule which demands the actor to go through hell and force him to suffer as much as possible. Saw horror movie series is the perfect example of their incarnation writing manual:) Only when the character is tortured enough, like a China dog:), and like a Jesus as the symbol of captured, tortured, and killed human, the Holy Skewer:), he is good and tasty enough for their perverted taste. Tormenting us, they export and project their Evil into us judging us for their primitivism and retardity. We have to be Evil, so they can be good. We have to suffer for them to live well. We have to die so they can live.

Psychiatric evaluation of Trump stands for the karmicons too, as the same birds fly together:) They are those false gods who create humans by their own image for their selfish needs, urges, and fantasies.

The karmicons wrote the script for Trump’s incarnant and not for him personally. Trump is unaware, ignorant, mindless, and violent. He has a mind as a useful tool but he uses it for harmful actions. Trump is a totally shattered personality to many Ego partial personalities, empty, frightened, and uncertain. Like all other unawakened persons, he is also heavily addicted to many objects which he uses to fill and reason his internal emptiness. He lives in symbiotic relationships of mutual lying, manipulating, and abuse. As a psychopath, he is selfish, senseless, and fraudulent. Trump is Important, and he thinks that he is more worthy than others. He is also very arrogant, he mocks, contempt, and curses others as much as he can.

In the comparison with the psychoanalytical personality theory, I see people only as being unaware or aware of themselves as Beings of Pure Awareness. Unaware are personally shattered to many partial personalities. For me, Freud’s “normal” Ego individual, who is more or less successfully defending himself of SuperEgo (strong urge to be idealistically perfect all the way to the obsessive-compulsive behavior) and ID (schizophrenia, paranoia, delusions of all kinds) is still “abnormal” because he doesn’t know who he really is. Unaware is not aware of Pure Awareness, and that is the reason that he feels so empty inside. He lives with limited attention strongly connected and addicted to objects, persons, statuses, states, substances, money, things, etc.

The main difference between the psychological personality theories and my model is that for them, a normal person is the one who can go to work:) For me, a natural person is an Aware person. Even if he doesn’t do anything, he is fully aware while even three jobs can’t help the unaware to become aware of who he really is:)

What is gonna happen to Trump in the future? The author of the psych eval is afraid that he will kill himself with suicide. That is possible, but only if the karmicons wrote that in his script. Otherwise, and after the start of our planetary work, he will be thoroughly examined as one of the important players in the Earth game. If he was or will be physically violent or harmful, he will be removed from the planet, rejuvenated, personally transformed, and returned here. If he will be just harmful, he will go to the program for awakening and personal development, the same as all other Earthlings. 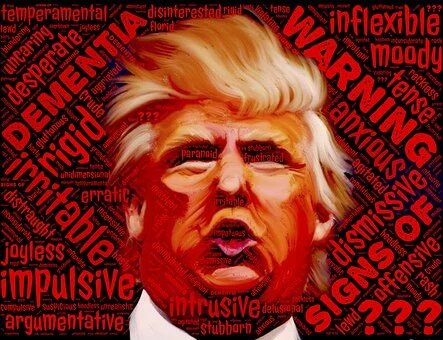 There is a great possibility that Trump wasn’t infected by the coronavirus. In the marketing optic, that would be the best option for him to act like an ordinary man and common American who got infected, went to the hospital, and then returned to the White House from the hell of the deadly virus infection as a Hero. He would get all votes from the infected ones as they would think that if they vote for him, for the wonder Orange Cure, they will be cured too. The healthy ones would vote for the miraculous Orange Vaccine thinking that they will be protected from the infection.

Trump got out of the hospital returning from the dead exactly after three days, same as Jesus, so they could also proclaim him a Saint:) They could create a new religion, Trumpism. “I believe that Trump lived, got infected by the coronavirus, and got cured after three days. I accept Him as my savior, spiritual leader, and god.” Believers would have orange faces, wearing false wigs and ties to the knees:)

Whoever wins the American 2020 elections, America and the world lose.

It’s not really important who will win the election as the system will stay the same. If Biden wins or Trump stays, they will still have the same and harmful political system of democracy which divides society into two opposite poles pointing them to each other, together with the capitalistic economy of the rich Elite who exploits poor folk. Real change will come only when we end all the karmicons systems on the planet and create our ones, new, natural, and beneficial for all. New leaders will be only aware, awakening, or awakened. Nice, friendly, and loving. Smart, useful, and fair.

I sent to my friends Palkies the whole model for natural life which they accepted immediately. In two years, they completely released the old karmicons systems of The Politics of Hate, The Economy of Abusement, The Law of Punishment, and The Religion of Separation. I write in detail about those four riders of the apocalypse in the 3. book of Letters to Palkies Messages to my friends on another planet which will be published on Amazon in late November or in December.

Palkies are very satisfied with a new way of life bringing them a lot of new rights and joy. We will do the same on Earth, and I can tell you that you will be also very pleased with a better life. Especially with new rights as the right to the free estate and house, right to the starting one million euros or dollars, free education, and health, etc etc.

Dear friends, we are one day closer to our new and fantastic life.

Read more about the awakening and exercises for awakening which will help you to easily personally develop and ready yourselves for the new, natural, and wonderful life in my book series Letters to Palkies Messages to my friends on another planet. You can get Book 1 and 2, and my other books on Amazon: