Where are all the aliens: The Fermi paradox is solved

Prev
Next
Awakening
Where are all the aliens: The Fermi paradox is solved

Before I write about why we are seemingly alone in the cosmos, let’s look at how physicist Enrico Fermi created the Fermi paradox by asking the same question:

“The Fermi paradox, named after the physicist Enrico Fermi, refers to the apparent contradiction between the high probability of the existence of extraterrestrial civilizations, as suggested by e.g. the Drake equation, and the actual observations that have not yet confirmed the existence of such civilizations. The main points made by Fermi and Michael H. Hart in this regard are the following:

– The Sun is a typical star, and there are billions of such stars in the local Milky Way Galaxy, many of them much older than the Earth.

– It is very likely that some stars have Earth-like planets, and assuming that Earth, with its favorable conditions, is a typical planet, intelligent life forms could evolve on them.

– Some civilizations could develop the technology for interstellar travel, which is what our civilization is trying to do.

– Despite current ideas of interstellar travel reaching speeds barely a tenth of the speed of light, we could travel the entire Milky Way in about a million years.

According to the above, an alien civilization should have visited Earth by now. Thus, one day, Fermi is said to have said the famous question “Where is who?” during lunch. Based on Fermi’s paradox, several hypotheses have been put forward, ranging from the denial of extraterrestrial life to the too-short life span of civilization, which makes direct contact practically impossible, to the so-called zoo hypothesis, according to which extraterrestrial civilizations deliberately refuse to contact humanity, which they have completely isolated from the galactic community.” Source: Wikipedia

Aliens are already on Earth 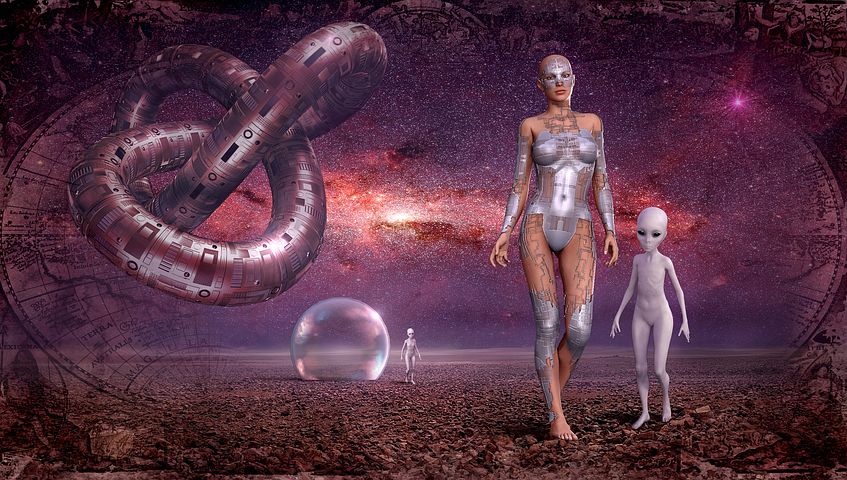 Before I answer where all the aliens are, let me tell you that until the abolition of the Karmic Organization, the liberation of galaxies, solar systems and planets, aliens or space people came to Earth every day. The inhabitants of other planets were forcibly ripped out of their lives by the karmicons and teleported to pregnant women to be incarnated in children. Another group was implanted into already born and adult humans. In addition to incarnation and implantation, many inhabitants of other planets were forcibly teleported to our planet to act as karmic stewards, or so-called voices in their heads, urging Earthlings to do harmful acts. Add to these the karmic channeled messages; the reptilians who lived in caves under the Earth; the 5th-dimensional planet in the interior of the Earth called Agartha; and UFOs.

This means, of course, that we were not alone, we just didn’t know it, because we had a limited perception of the higher dimensional worlds. For experimental reasons, my higher vision was partially opened, so that since 2004, when I was awakened, I have seen visitors around me as if they were in the dark. I could also hear them when they were talking to each other or talking to me.

This means that all the people who were declared insane by the psychiatrists because they had “visions” and “hearing” were normal people who were deliberately opened up to higher vision and hearing by the karmicons, but who were not told who these beings were that they were seeing and hearing and what they really wanted from them. Many therefore thought they were demons (some really were) and were very afraid of them. Most of these visitors were from other planets – people who had been forcibly moved to Earth. Some had been completely silent for decades, while others had acted in a harmful way, forcing people to do stupid things, under karmic orders. Now and then a visitor could say something wise and useful. Most people heard these voices, but they thought they were their own thoughts. In spiritual circles there is also a so-called silent voice, which is said to be from God, living inside men. Ha, ha, ha, it was just the karmicons predators pretending to be gods, archangels and angels, ascended masters and other liars, posers and bluffers.

Where are all the aliens?

There are two answers to the question of why Earth scientists do not discover human life on other planets. The first is that the karmicons don’t allow it, because they want to keep humans in isolated fields where they can be more easily controlled.

The second reason is that Earthlings simply cannot detect life on other planets with 3rd-dimensional space exploration technology, because most people live in the 4th and higher dimensions and simply cannot see them with technology such as the Hubble Space Telescope and other exploration probes. If we had 4th and higher dimensional technology, we would immediately see that the cosmos is full of inhabited planets. After Earth is liberated, we will also present a new and comprehensive map of our cosmos, so you will see where we are and where everyone else is.

Each of the two billion inhabited galaxies has about 500 to 1,000 solar systems, and each of them has about 1,000 planets in it. Now count how many people live on them. After the last planet has been liberated and the last controllers have left, we will first bring all inhabited 3rd D planets like Earth into the 4th dimension, which will make it easier for us to travel, visit and interact with the inhabitants of other planets. On the very first day, our space friends and Palkies will come to Earth as mentors to help Earthlings to abolish old and harmful systems and create new and beneficial ones for all. I can tell you that you will be delighted with them, as they are both very kind, friendly and loving.

I look forward to soon publishing the best news in the history of the Earth and declaring it free. After that, we will send the good news to all the galaxies and start preparing for the biggest space party in the history of this cosmos. Hooray and yippee!