Prev
Next
Book
About the time, that incredible liquid:)

The whole Existence is standing still and doesn’t move or change. That is how the Absolute Awareness is “experiencing” It. “Experiencing” because It is not the being so It can not experience It.

This appearance of virtual moving and changing is time.

Time is not an illusion, that doesn’t exist because this appearance is very real. We have limited awareness which is not fabricated and false; it is true.

Time is not an illusion that doesn’t exist because this appearance of moving is very real. We have limited awareness which is not fabricated and false; it is true.

We also have different times. The time of the Existence is ever Now and stands still. In the Existence, as the Whole Everything already happened or more precise All already Is. All is happening at the same time and will be happening forever.

We have different times; I wrote. On our planet, we measure time by spinning the planets around the sun. It is less known that our whole solar system with sun and all planets are also spinning around bigger suns. And all galaxies are revolving round and around. And cosmoses, too.

We have planetary, solar, galactic and cosmos times. These are times that are measured by the moving or circling objects in the space. Planet X makes a Y way in W time.

There are different times because suns and planets in other solar systems and galaxies are spinning different and their years, months and days are different. It is also possible that they measure the base measurement unit as a second or interval between two points different from us. Their second could be our minute or just a tenth of our second.

In the energy worlds above 8. dimension planets and suns don’t exist. There are no objects at all. And no time watches, too:)

They don’t measure time but their awareness is limited so they don’t experience everything at the same time. Before they floated there, now here and in a while they will fly over there:)

They still live in consequentiality but because of the absence of the material objects, suns, planets and physical bodies they don’t measure time.

They don’t live anymore in the time of seconds, minutes and hours of the calendar but more with terms as before, now and later. Their place is also different as is completely “empty”. There are only beings who float and fly.

Our experience of time is in fact the expression of our limited awareness of awakened or consciousness and attention of unawakened. Luckily these awarenesses are flowing more or less fluidly. They could jump in time from one second to other, one minute to others with us losing the awareness in between. We would live like strobe lights flashing all the way:) Every time when we would light up a new place or object we would become aware that we exist and that we have something in front of us.

Let’s add the accidentals:) Time is running inline, from Monday to Sunday, from January to December and we count the years one by one in the straight line, too.

Imagine that our awareness or attention would accidentally jump around Existence. In time and in place. One minute we would be babies, another 5 minutes in school and in an instant we would be dying on the deathbed, and right after that and before death on the holidays again.

Our personal awareness is limited to us. Let’s make it even more complicated and add to the accidentality of time and place the experiences of all different beings on our planet. Ten minutes dinosaurs, then spacemen in a distant future and after that flees:)

Now you know why I wrote that lucky us that we have Awareness:)

The Existence was never created and will never disappear. It Exists from ever to forever. Everything already Is. That means that we create nothing because it’s impossible. Despite that, I use the term creating because we have limited awareness and we think that things are appearing and disappearing and also that we are causing some of it. We just think that we are switching lights on and off. In fact, all the lights are on all the time.

Luckily our journey is fluid and connected. I wish that it will become more nice and eternal. Existence doesn’t have the beginning nor end so the eternal journey can only be circular.

The karmicons as totally Evil beings did and are doing everything to destroy our trip. They drove us from one disaster to another and crashed us in all the walls and pushed us to the deaths at the end. With the ending of that Evil organization, we will move to the 1. class and have a really nice journey. 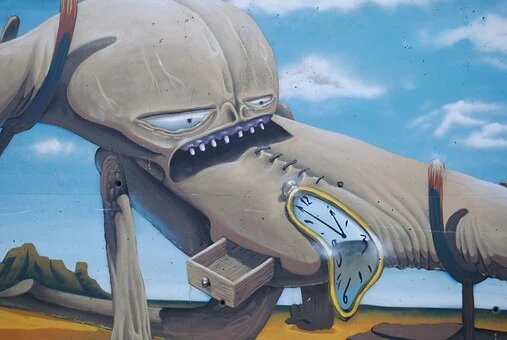 At the end of our time travel, I will tell you an incredible time paradox. One visitor from other planets says: “What is the story about the time without at least one time paradox?”:)

So, she should be 36 years old now. What do you think she said when I asked her how old is she in January this year?

For months we were waking up at the same time and hang out together for many hours. Same date, same hours and minutes, same time. All the same, to the last second. In the present time everything is the same, but when we looked back her 9 years mysteriously vanished!

All of these 9 years we were together and at the same time because the present time is the same on both planets, on Earth and on Palki. We checked it and confirmed it many times. But the time that already passed on Palki is mysteriously vanishing.

My time is complete and I become older for exactly 11 years since our first year. All the time is here, to the last second. I am 11 years older, Sanja only 2…

How is that possible? Send your answers to the addresses at the end of the book. I really want to know what you gonna say. In the future, we will know what happened to the lost time on their planet. The person or persons that will answer correctly we will give a nice gift. Maybe a multidimensional watch that shows present and pastime, too:)